There are things that many of us seem to take for granted and where these things came from like: fairies, unicorns kites. When I was a kid I used to go to the local toy store and buy a kite kit, dash home and put it together. I couldn’t wait to sprint down to the neighborhood park to fly my kite among the trees.

I loved that feeling of holding the spool of string in my hand as the wind caught the kite and tugged me along, sometimes pulling me to run. Looking up into the blinding sun as the kite sail colors flapped and the ribbon tail danced in the sky among the clouds. Me wishing all along, that I could fly and take off into the air and never return—just a memory.

Well, I’m all grown up (at least I look like an adult anyway) and it’s August and I am in Bali and it’s the middle of kite season. I’m sitting here on the couch surrounded by jungle and the sound of the breeze and several kites with guwangs (bows) vibrating and humming overhead is all I hear. Well, that’s not entirely true. I also hear hammering and a neighbor annoyingly using a table saw every so often…

most of the time, I hear birds + roosters, geckos chirping, and cats meowing for food (I’m cat-sitting for a friend) and when I look out over the palm trees I see a few colorful kites tethered adrift and I wonder—who invented the kite? Of course, I never actually went out of my way to find out. But my inquisitive laziness was challenged when Bob invited me to go down to the beach to check out a Balinese kite flying competition.

When we arrived, there were crowds of people and about a dozen kites in the air and traditional Balinese gamelan music was playing over a loudspeaker. As we approached the competition, I noticed there were at least 5 to 10 people manning the kite strings. They were tediously tugging and pulling these huge kites down and I was disappointed, thinking we had missed the competition. But then I noticed, there were a dozen more kites laying the beach and groups of young Balinese men eagerly waiting in anticipation for their turn. Then a horn sounded and this is what we saw…

Check this kite video out!

It was pretty amazing seeing all these huge kites flying and so many folks excited about flying them. Kite flying season in Bali is from June through August and there are kite festivals and competitions held all over the island. We found out that kite flying is pretty serious business and considered an honor for young Balinese boys and men. They learn techniques for proper kite making from the village elders and the holy women and men give blessings and pick the days and times the kites are made to ensure good luck. The teams in the competitions are judged for “best design”, “best launch”, and “longest flight” and can win cash money.

Each kite’s frame is handmade with bamboo and some light fabrics are used for the sail and the colors even have meaning too, they represent the Balinese Hindu Trinity: red=Brahma (creator of the Universe), white=Vishnu (the protector), black=Shiva (the destroyer), and yellow=Dewata Nawa (eight gods of the eight directions). Little ones in the villages aspiring to be future kite flyers make homemade mini kites as well. It is so much fun watching them dragging their little kites around, as they run and jump trying to get them to lift up into the air.

We asked some Balinese kids about the different types of kites we had seen, they said they had no idea what each one is called because there are so many. I found out that the most popular kites flown are the Janggan (bird) with a (ribbon tail) as long as 100 meters or more, Bebean (fish) is the one we see most often in the sky, and the Pecukan (leaf) is the most difficult to fly because its odd shape makes it really hard to keep up in the air, so some serious skills are needed to fly those babies. And there are all kinds of creative and colorful and wild creations to be seen flying along the beaches and over the rice fields as well.

In this competition, the kites being flown were Bebeans (fish) that were (I am only guessing) around 6 feet wide and 15 feet long but some kites can be twice that size and some are even bigger. I’ve seen amazing dragon tailed kites flying at the beach that look like they are as long as a city block. We’ve seen lots of kites over the years, and watching these monstrous kites being precariously carried + finagled through crowds and scootered through town is pretty humorous too—especially when it’s down a narrow one-way gang (alley).

We were astounded by how big these handmade Bebean (fish) kites looked up close. Bob stated, “It’s as big as a fucking car!” And they are! 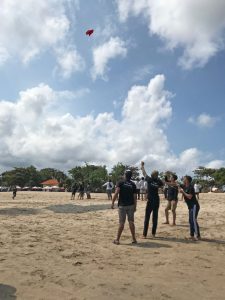 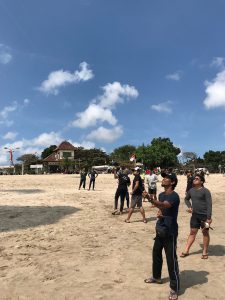 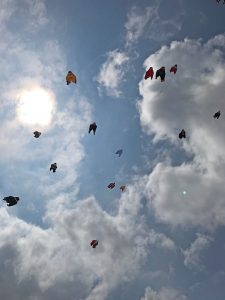 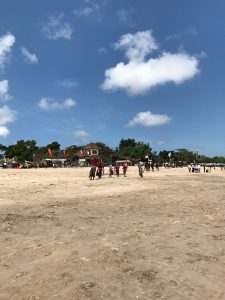 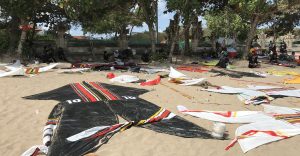 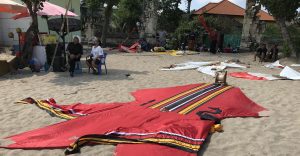 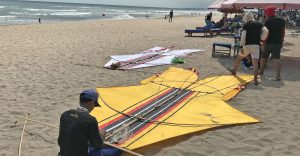 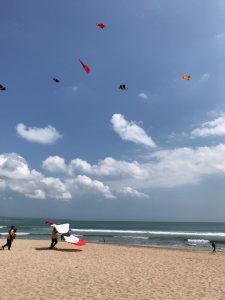 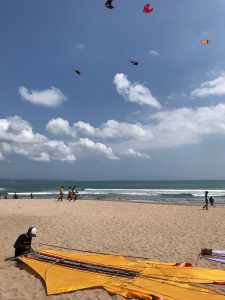 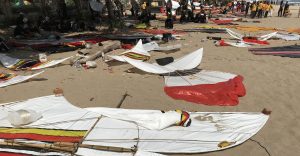 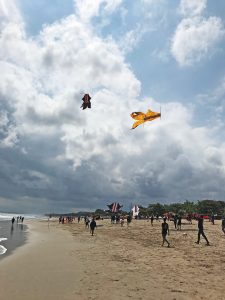 One of the most exciting things I learned was that that kite flying actually first began in Indonesia or at least that is how far scientists have traced it back–they discovered pictures of kites painted on ancient cave walls that are said to be dated around 9000 B.C.–isn’t that crazy cool!

send messages up into the heavens

When we were living in a village in Ubud, our favorite thing was to spend the afternoon on our porch overlooking the rice fields watching the kites fly. I felt that something special was happening but could never quite put my finger on what it was. Then I discovered through research that Bali kite flying is used as a sacred ceremony, it is a way for farmers and families to send messages up into the heavens to the Hindu Gods to wish for and/or say thank you for bringing plentiful crops and harvests. I told Bob this and he laughed and said, “Funny, so flying a kite message was like the first Tweet.”

I love Balinese kites, so much so, that I carried several with me back on the plane to the U.S. for my little nieces, nephews, and cousins. This was not an easy feat—I was pulled over by TSA in Japan and Bob had to wait 30 minutes while they uncomfortably searched my bags and rubber-gloved every crevasse… But it was worth it—seeing the smiles on my family’s faces when they saw the kites. They were super colorful and cool too—a hand-painted butterfly, a couple of red dragons, and a bird. When I go back home for visits, I love seeing the beautiful kites hanging in the kid’s bedrooms and playrooms.

Who knew kites could be so fascinating, so full of tradition + symbolic meaning, and rich in history—so much more than just the old tale of Ben Franklin flying a kite with a key on it and discovering electricity. Oh wait, come to think of it, maybe he won’t have discovered electricity if wasn’t for these important Indonesian traditions and kites. Maybe we would all be sitting in the dark… And here I am still in awe—hanging out right here in Indonesia, where it all began for the World’s celebrated and beloved kite.

Stay Tuned! We will post more pics of awesome Balinese kites as we come across them… ☺ ☺

I'm a nomadic poet and love all things odd.

This cutie is Pepsi! Read this poem & more on Trav

A little poetry for you... Check out our new blog/

Take a drive through the countryside of France and

Some more street art for you to ogle, this one is

A beautiful cloudy day at Swami’s Beach in Encin