We were spending a few days in Bangkok to visit a friend, and he had the idea to take us to the Creative Park. It is a sprawling park with many little venues housing art and oddities.

We arrived there on a slow night, after a big holiday. Not many people were around which I hear is quite rare for the place. It was slightly eerie, with mist and fog clouding the air all around us. I felt like I was in an after-hours carnival sideshow and something unexpected was going to pop out of the shadows and fog at any moment.

Wandering around without a crowd was very pleasant, allowing us to spend more time looking at exhibits without feeling rushed or pushed. 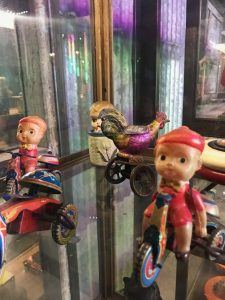 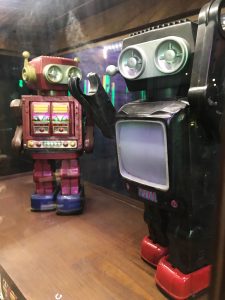 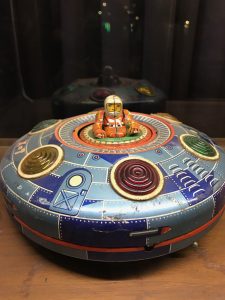 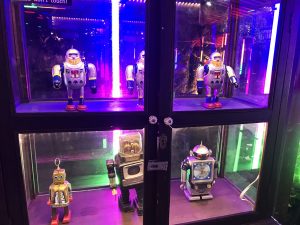 We happened upon huge glass boxes full of displays and galleries of pop culture toys and vintage collectibles.

Large sculptures (some quite humorous) were scattered throughout the park.

Crazy laser and light shows made the evening extra special.

There are game parlors, cocktail bars, a market, food stalls, and a large airplane (an L10-11) on the property as well.

Under the plane, there was a bar lounge with chairs made from the old plane seats and stage with a live band playing the Blues. We spotted a chandelier hanging in the cockpit window and just had to go up and take a peek.

As we took the lift up, the hostess explained that the airplane was brought over piece by piece from the local airport in trucks and reassembled in the park and then had been converted into a bar and restaurant.

The interior was a pretty cool + dark + moody, it felt like something a rockstar would do–convert a plane into a party lair to be transported to and from concerts.

We were escorted to the VIP table (not sure why?) at the tail end of the plane, fashioned up a few steps and overlooking the room. The bar took center stage in the aircraft with dinner tables and couches lining the walls. 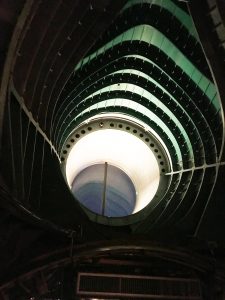 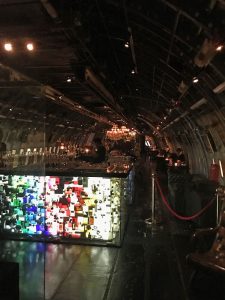 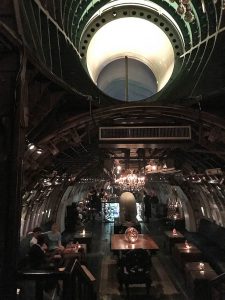 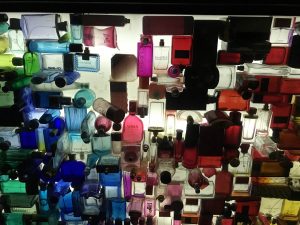 The walls were stripped down to the bare metal bones + rafters and the bar was made with a mosaic of empty perfume bottles.

We were enjoying catching up with our friends and sipping on drinks when someone from the bar announced a light show was about to start. As the music began, duh! duh! duh! duh! — duh! duh! duh! duh! We looked at each other perplexed and deliberated on what music it was, maybe from the movie “The Omen”? Not quite sure, and not quite sure why there was a light show either. In any case, in situations like these, it’s best not to question and merely accept that it is happening.

Check it out for yourself–is that the song from “The Omen”?

The light show was pretty fun and gave us things to talk about for quite a while. After we downed our drinks, we were escorted out through the plane’s exit hatch, down some back stairs but then upon looking back, we wondered why we didn’t get to ride the red swirly slide down–…

We continued to walk around the park and came upon an art show in one of the galleries. 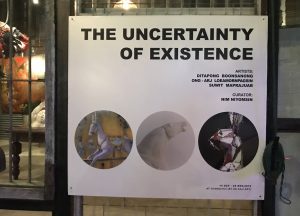 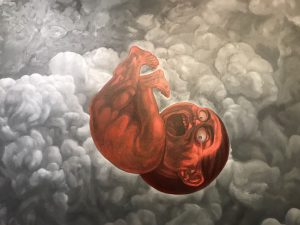 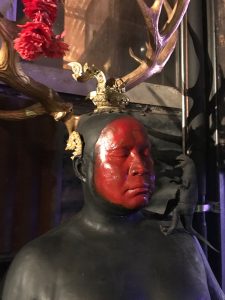 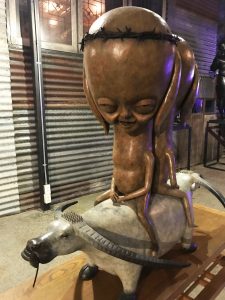 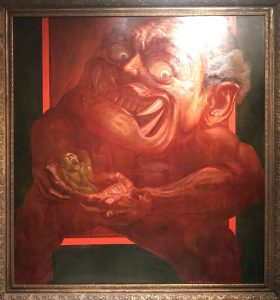 All in all, it was pretty fun, and you could tell there was a lot of effort and passion put forward creating such a park. It made me wonder how many places in the world could create such a large scale and eclectic environment. That is the fun thing about visiting and exploring Bangkok, you never know what your gonna find.

If you are in Bangkok you’ve just gotta check out ChangChui Creative Park!